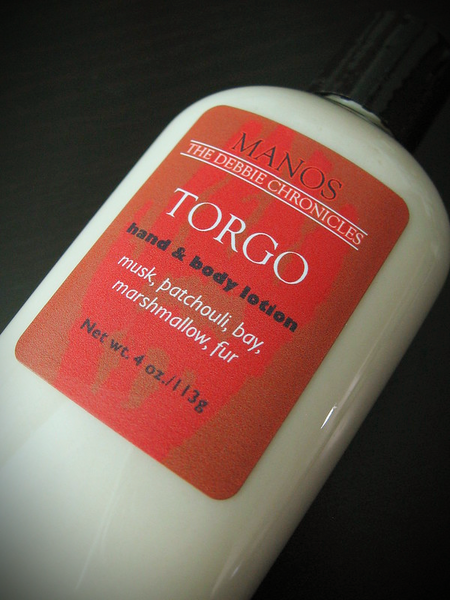 This unearthly child of the fae realms was trapped in the temple of Manos and never found his way home, fated to serve The Master for eternity. But could Torgo have escaped his sentence of death? Perhaps this strange creature will reappear sometime in the future and surprise us all. An earthy blend of satyr’s musk, patchouli, bay leaf, warm fur, and a bit of burnt marshmallow.

A portion of sales will be donated to the American Foundation for Suicide Prevention in memory of actor John Reynolds.

Manos: The Debbie Chronicles is a modern reimagining of the story world from the 1966 cult classic film, Manos the Hands of Fate. Jackey Neyman Jones reprises her role as "Debbie" who has escaped the clutches of The Master and is on a mission to rid the world of monsters like Manos. Along the way she encounters new friends, old enemies, supernatural beings, and a whole lot of occult weirdness.

All proceeds from the sale of the Manos line of products (minus donations to charity) will go directly into production costs to help make the one-hour pilot episode of this dramedy anthology series.

Slip is a satiny hand & body lotion that absorbs quickly, leaving your skin soft & delightfully scented. This listing is for a 4 ounce bottle of delicious hand & body lotion made with 85% organic ingredients. It's packed with nourishing aloe, oils & botanical extracts, & is certified vegan. Slip is is paraben-free, -cone-free, & contains no propylene glycol or mineral oil. Most of my scents are phthalate-free, too!

I searched long & hard for a lotion formula that would moisturize without leaving a greasy, messy film. Slip is light-weight enough to apply on the go, but it hydrates & softens for hours. Slip is blended in small batches & packaged in recyclable bottles with all ingredients clearly labeled for your peace of mind:

This product hasn't received any reviews yet. Be the first to review this product!